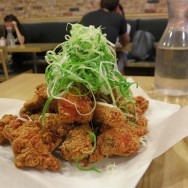 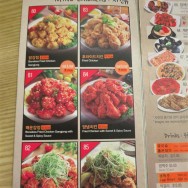 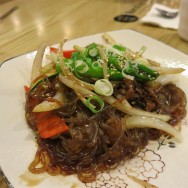 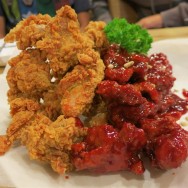 Boneless half original half sweet & spicy 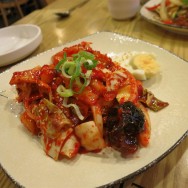 Part 2 of our KFC (Korean fried chicken) crawl has led us to NaruOne – a restaurant down a basement underneath a hair dressing salon in Koreatown. Reportedly the best fried chicken in Sydney – we had high hopes here. Prices appear to have been increased recently and so have our stomach capacities, despite having just left Arisun.

Side dishes were a token gesture but ended up being rather tasty. I’d almost go so far as to say I’d come back to try the other parts of their menu not involving fried chicken. I know, crazy, right? What’s become of me? Maybe next time I’m in the area…

So how was the chicken? Well it was all rather good. Maybe I was expecting more due to the internet’s hype machine but there was nothing wrong with the chicken. It was excellent. Not sure how they keep it so grease-free but I think I prefer my fried chicken a little saltier. The fried chicken here seems to be more about the texture, and in that aspect it delivers in spades. The boneless chicken makes for easy eating too.